The area known as the Citadel sits on the highest hill in Amman, Jebel al-Qala’a (about 850m above sea level), and is the site of ancient Rabbath-Ammon. Occupied since the Bronze Age, it's surrounded by a 1700m-long wall, which were rebuilt many times during the Bronze and Iron Ages, as well as the Roman, Byzantine and Umayyad periods. There's plenty to see, but the Citadel's most striking sights are the Temple of Hercules and the Ummayad Palace.

Artefacts dating from the Bronze Age show that the hill was a fortress and/or agora (open space for commerce and politics) for thousands of years.

The two giant standing pillars are the remains of the Roman Temple of Hercules. Once connected to the Forum (downtown), the temple was built during the reign of Roman emperor Marcus Aurelius (AD 161–80). The only obvious remains are parts of the podium and the columns, which are visible from around town. There’s also a rather touching remnant of a stone-carved hand, which shows the level of detail that would have adorned the temple in its glory days. Nearby is a lookout with sweeping views of the downtown area.

The Citadel’s most impressive series of historic buildings is focused around the Umayyad Palace, behind the National Archaeological Museum. Believed to be the work of Umayyad Arabs and dating from about AD 720, the palace was an extensive complex of royal and residential buildings and was once home to the governor of Amman. Its lifespan was short – it was destroyed by an earthquake in AD 749 and was never fully rebuilt.

Coming from the south, the first major building belonging to the palace complex is the domed audience hall, designed to impress visitors to the royal palace. The most intact of the buildings on the site, the hall is shaped like a cross, mirroring the Byzantine church over which it was built. After much debate as to whether the central space had originally been covered or left open to the elements, consensus came down on the side of the ceiling dome, which was reconstructed by Spanish archaeologists. 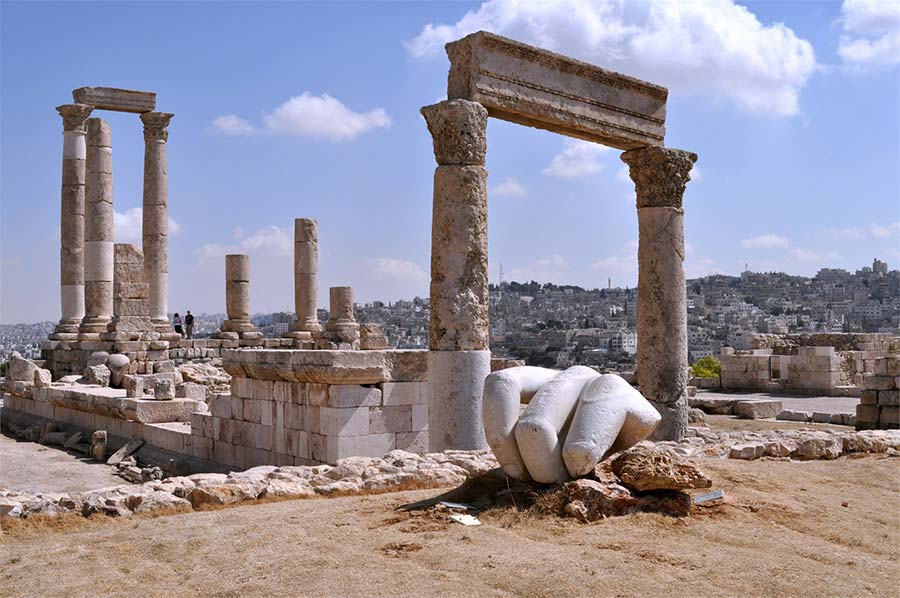 A courtyard immediately north of the hall leads to a 10m-wide colonnaded street, lined with numerous arches and columns, and flanked by residential and administrative buildings. Further to the north is the former governor’s residence, which includes the throne room.

East of the audience hall is the Umayyad Cistern, an enormous circular hole with steps leading down to the bottom, which once supplied water to the palace and surrounding areas. The small disc on the floor in the center once supported a pillar that was used for measuring water levels.

Near the museum to the south is the small Byzantine Basilica, most of which has been destroyed by earthquakes. It dates from the 6th or 7th century AD, and contains a few dusty mosaics.

The Citadel ticket office is on the road leading up to the Citadel’s entrance. Multilingual, fully licensed guides (up to JD15 per hour) usually congregate near the ticket office and can really enhance your visit.

The only access roads to the Citadel are from Al-Malek Ali bin al-Hussein St. It’s better to hire a taxi for the trip up (around JD1 from downtown), and save some energy for the recommended walk down. Steps lead from east of the Citadel complex, past a viewing platform to Hashemi St, opposite the Roman Theatre. This makes a fine start to a walking tour of downtown.

This magnificently restored theatre is the most obvious and impressive remnant of Roman Philadelphia, and is the highlight of Amman for most foreign visitors. The theatre itself is cut into the northern side of a hill, and has a seating capacity of 6000. The best time for photographs is the morning, when the light is soft – although the views from the top tiers just before sunset are also superb.

The theatre was probably built in the 2nd century AD during the reign of Antoninus Pius (AD 138–61). It was built on three tiers: the rulers, of course, sat closest to the action, the military secured the middle section, and the general public perched and squinted from the top rows. Theatres often had religious significance, and the small shrine above the top row of seats once housed a statue of the goddess Athena (now in the National Archaeological Museum), who was prominent in the religious life of the city.

Full restoration of the theatre began in 1957.Unfortunately, non-original materials were used, which means that the present reconstruction is partly inaccurate. However, the final product is certainly impressive, especially considering that the theatre has again become a place of entertainment in recent years. Productions are sometimes put on here in July and August – check with the tourist office or ask at your hotel.

The Jordan Museum, located next to the City Hall, is a museum of international standard. Housed in a beautiful modern building, a series of beautifully presented and informative displays tell Jordan's historical epic from the first people through the Nabatean civilization to the cusp of the modern era. Highlights include the oldest-known human statues (the spookily modern 8000-year-old mannequins of Ain Ghazal), Jordan's share of the Dead Sea scrolls, and a host of remains from Petra and surrounds. The upstairs galleries, featuring Islamic Jordan to the Arab Revolt, were still to open when we visited, but either way, this museum is a must.

On the hillside to the north of the downtown area, this cultural haven is dedicated to contemporary art. The main building features a small art gallery with works by Jordanian and other Arab artists, an art library, and workshops for Jordanian and visiting sculptors and painters. A schedule of upcoming exhibitions, lectures, films and public discussion forums is available on the website and in the Jordan Times newspaper.

Almost as significant as the center’s artistic endeavors are the architectural features of the site. At the base of the complex, near the entrance, are the excavated ruins of a 6th-century Byzantine church. Buildings further up the hill are mostly restored residences from the 1920s – it was in one of these that TE Lawrence wrote part of Seven Pillars of Wisdom. There is also a peaceful cafe and gardens with views over Amman. 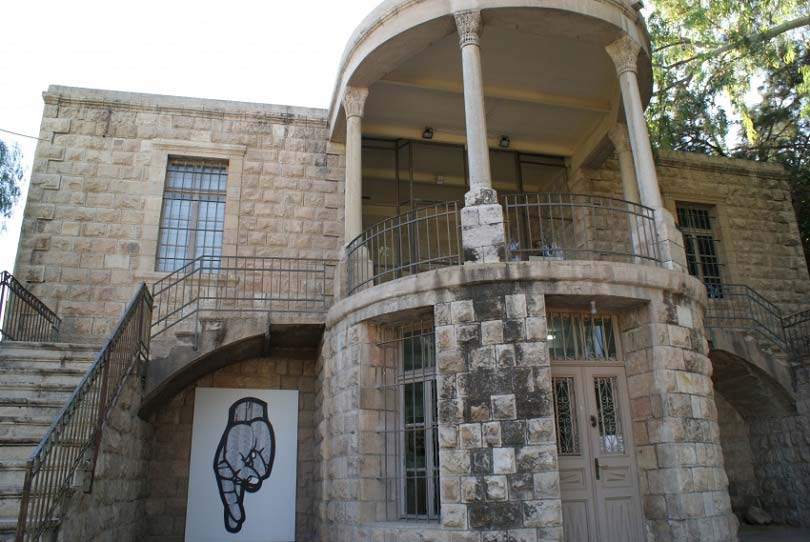 Access is easiest on foot. From near the southern end of King Hussein St, head up the stairs under the ‘Riviera Hotel’ sign. At the top of the stairs, turn immediately right onto Nimer bin Adwan St and walk uphill for 50m where you need to take the left fork. The entrance gate (no English sign) is on the right after a few meters.

This small but impressive gallery is a wonderful place to gain an appreciation of contemporary Jordanian painting, sculpture and pottery. Renovated in 2005, the attractive space highlights contemporary art from around the Middle East and the greater Muslim world. Temporary exhibitions here are of high quality, and serve as a valuable introduction (or refresher) to the world of Islamic art.

The gallery is signposted from Suleiman al-Nabulsi St, opposite the King Abdullah Mosque. 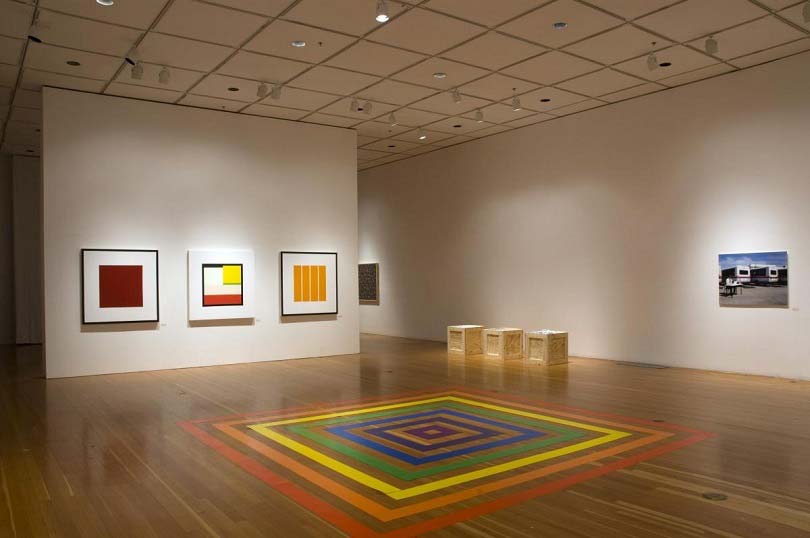 The gallery is housed in two buildings, separated by a small park – Building 1, on the north side of the park, is the smaller but holds an excellent gift shop; Building 2 opposite contains the bulk of the collection and a cafe.

Highlights of this small museum include models of the Temple of Artemis and Nymphaeum at Jerash, a copy of the Mesha Stele, and finds from Bronze Age Jericho and the 6th-century BC Ammonite fort at Tell al-Mazar. Don’t miss the unmarked artefacts lying around outside the building, including several dolmens (ancient graves). To get to the museum, take any minibus or service taxi heading towards Salt from Abdali or Raghadan stations, then get off at the main (west) entrance to the University of Jordan and head for the clock tower; the museum is just behind it. 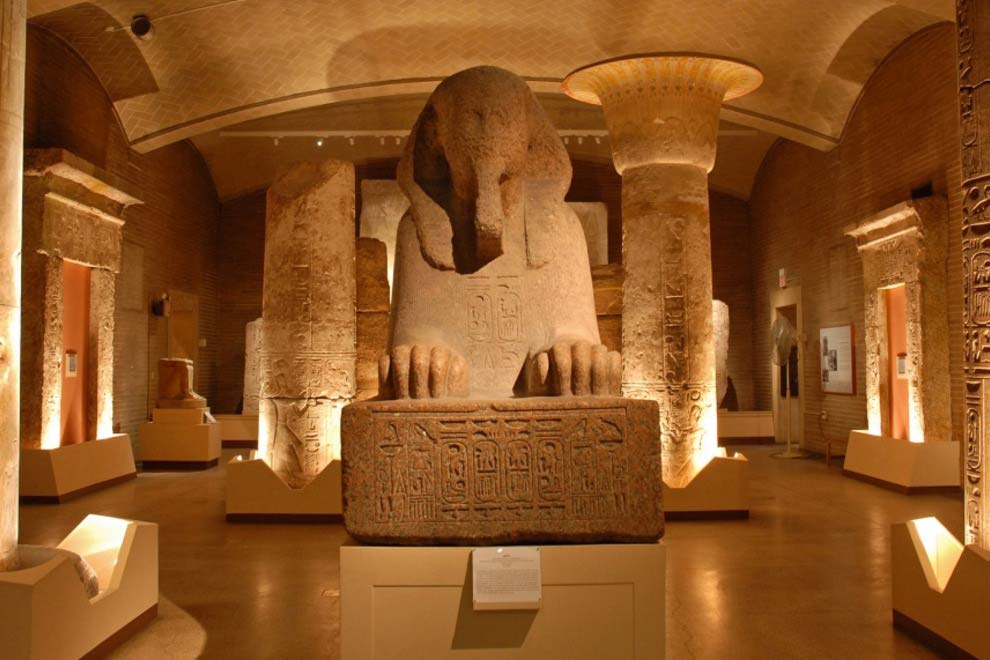 Built in AD 191, this elaborate public fountain was once a large, two-story complex with water features, mosaics, stone carvings and possibly a 600-sq-metre swimming pool – all dedicated to the nymphs. Excavations started in earnest in 1993, and restoration will continue for many years. Except for a few columns, an elegant archway and a few alcoves, there is little to see, though the workers toiling away may yet reveal hidden treasures in the years to come. 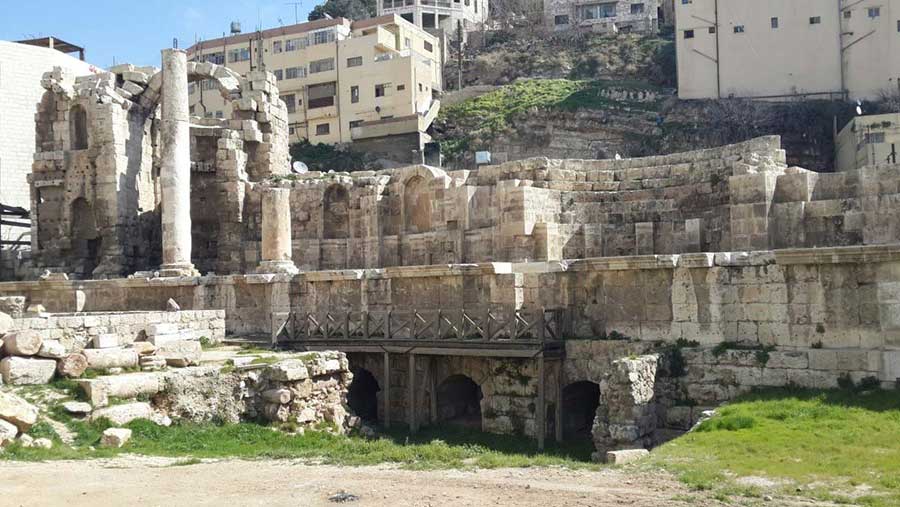 Immediately to the right as you enter the Roman Theatre, this small museum houses a modest collection of items illustrating traditional Jordanian life. It includes a Bedouin goat-hair tent complete with tools; musical instruments such as the rababa (a one-stringed Bedouin instrument); looms; mihbash (coffee grinders); some weapons; and various costumes, including traditional Circassian dress. Don’t miss the black-and-white photos of old Amman by the entrance. 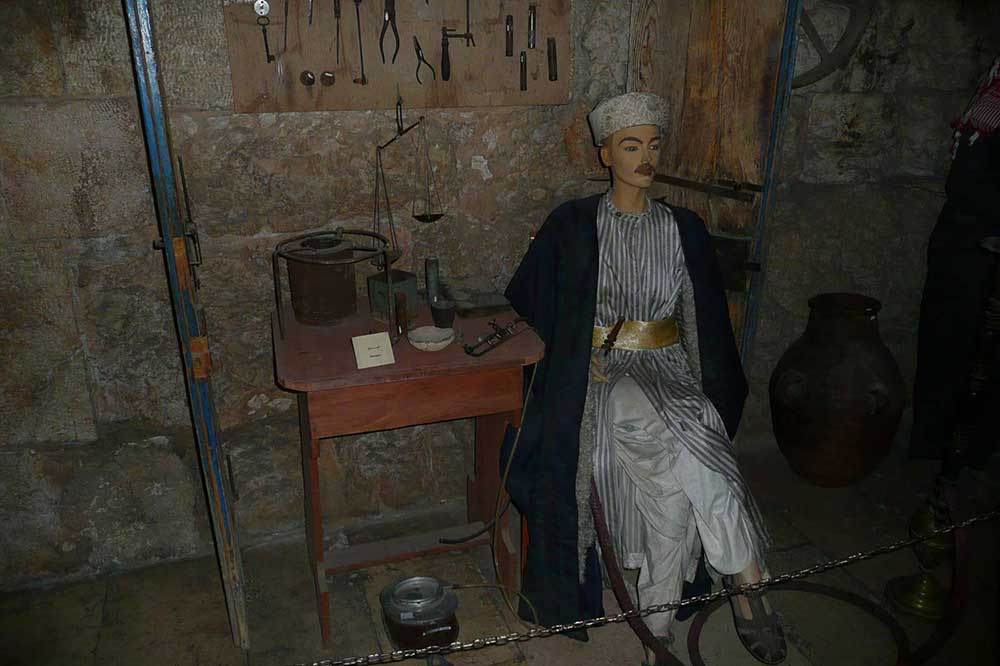 On the eastern side of the forum stands a 500-seat Odeon. Built in the 2nd century AD, it served mainly as a venue for musical performances. It was probably enclosed with a wooden roof or temporary tent roof to shield the performers and audience from the elements. Like its bigger sibling, the nearby Roman Forum, it is seasonally used for performances. 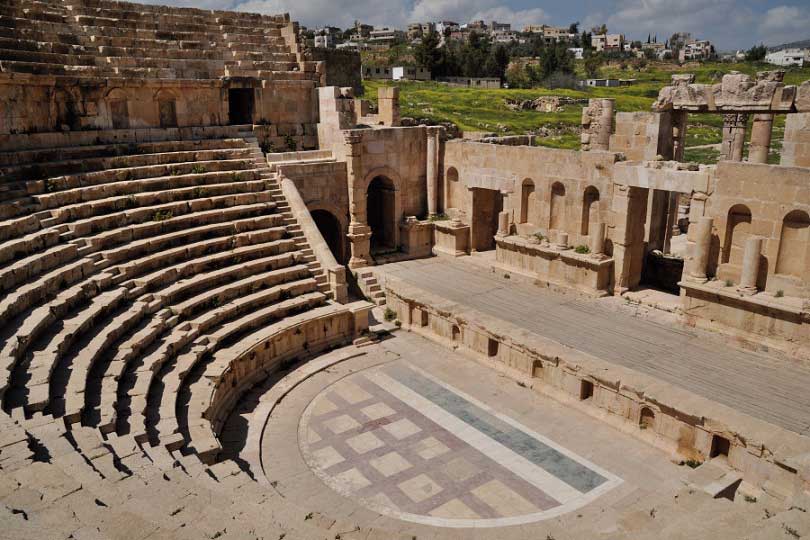 All local attractions text is courtesy of www.lonelyplanet.com